Hunger and hardship as weapons during times of civil war – more than 10.8 million people in Syria were dependent on aid supplies in the summer of 2014. They would wait for food and medicine every day. Three years after the civil war began, the UN Security Council has now finally enabled humanitarian aid convoys to enter Syria.

Human Plus has been supporting the people of Syria and neighbouring Turkey and Lebanon since October 2011.

Even at night and in fog, couriers transport our aid supplies over the border – to the people and field hospitals (photo) in Syria. They risk their lives to help.

Anestis Ioannidis, president of Human Plus (pictured on the left), travelled to northern Lebanon in May 2012.

Some 5,000 Syrian refugees have fled to the Lebanese border region since the escalation of tensions in Syria. Many of them have gunshot wounds. They have found asylum amongst the Lebanese people.

Poverty is extreme. Host families are unable to supply themselves, let alone the refugees, with the most urgently required items, and urgently need our help to avoid another human tragedy.

Ioannidis has gained an understanding of the distribution of aid supplies through our Lebanese partner organisation. There has been specific documentation of which family needs and receives which aid supplies. Ioannidis is extremely satisfied with the transparency and care.
The pictures of the children Ioannidis met at a kindergarten reflect the grim reality of fragile children’s minds. 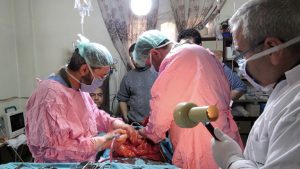 September 2012. Human Plus has so far been able to provide 350 tonnes of aid supplies – food, medicine, bandages, sanitary items, baby food, toys, shoes, clothing, detergents, blankets and medical equipment – to the people of Syria and northern Lebanon.
We returned to Lebanon with BILD to start up a nationwide call for donations, in close co-operation with “Ein Herz für Kinder”.

Liefers and Ioannidis visited one of the largest Syrian refugee camps, Bab al-Salaam, in the area near the Turkish border. They spent time with some of the 17,000 refugees, visited several families in their containers, and assessed the medical facilities at the camp. 80,000 Syrians had already fled over the border to Turkey before the conflict broke out in their homeland.

The many thank-you letters we have received from the donation recipients motivate us to unremittingly continue our involvement for the people in this region.

Thanks to our facilitators from the pharmaceutical and medical industries, we have so far been able to provide large quantities of medicine and medical equipment, as well as 13 fully equipped ambulances, as relief for the sick and wounded.
Human Plus has used the transportation of the vehicles as an opportunity to send respiratory equipment, bandage and an operating light to selected field hospitals. 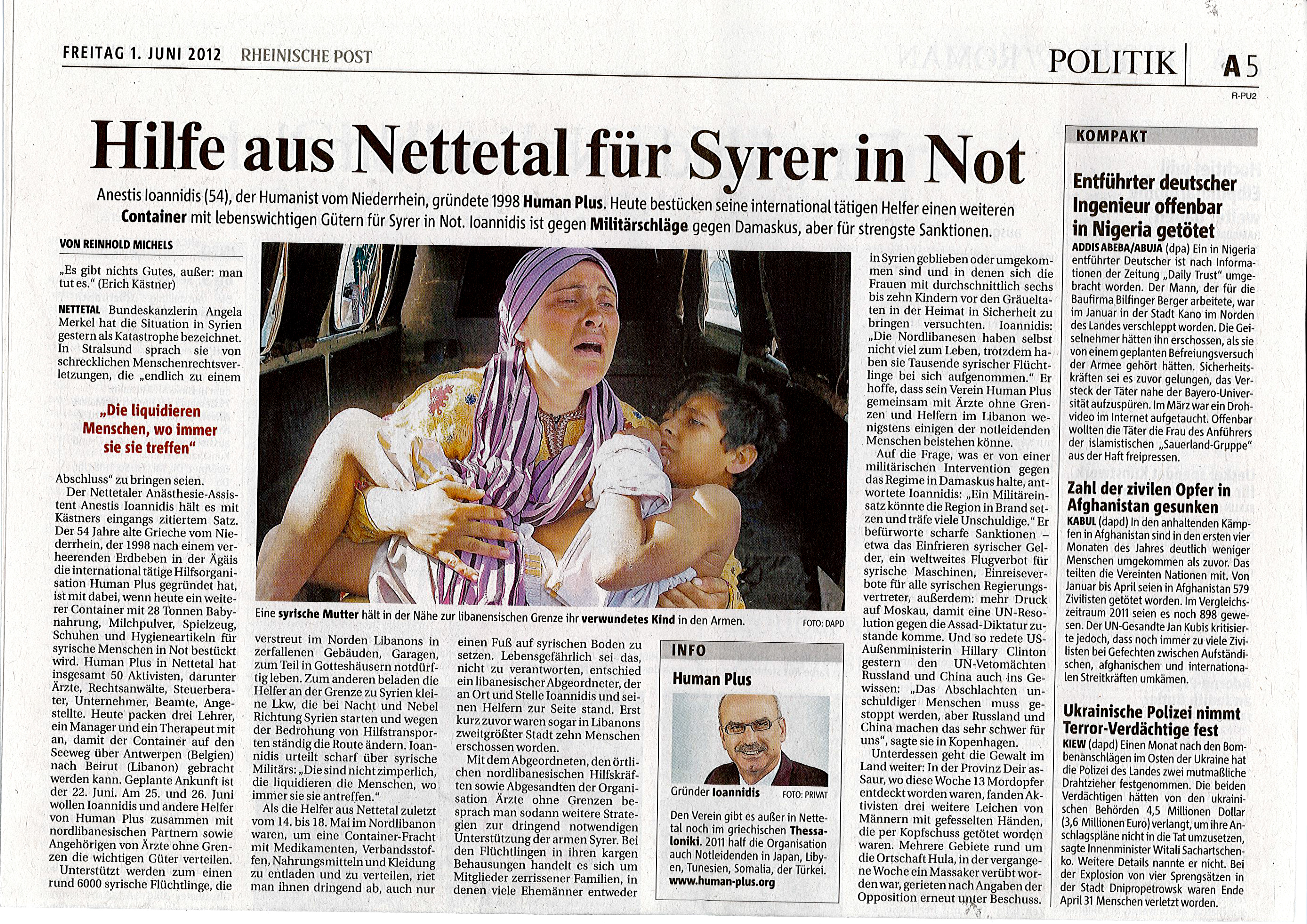 There is unfortunately no end in sight for the Syria conflict.

The 78 t of aid supplies we sent to Syria in February 2014 were distributed to the people there (Camp Bab al-Salam Salam, Camp Atma, Aleppo, Aqrabat, Marea, Marisha and Taftanas) 10 weeks late due to the intense combat operations.
These included medicine, medical equipment and bandages, food packs, baby formula and food, clothing, shoes, toys, camp beds and blankets, sanitary items and detergents.
The next containers of aid supplies for the people of Syria and neighbouring countries were prepared at the central warehouse in Nettetal in July 2014. Special thanks goes to our volunteer helpers.

A further 24 tonnes of aid supplies – medicine, bandages, food, toys, clothing and detergents – reached the desperate people in the Syrian camps of Babussalam, Adma Camp, Shemeren and Banbanur a short while later. Patients at various hospitals in Aleppo, in northern Syria, also receive our aid.

In the following video you can see Anestis Ioannidis with kids from Syria, delighted about the Aid of Human Plus.