The earthquake of the century 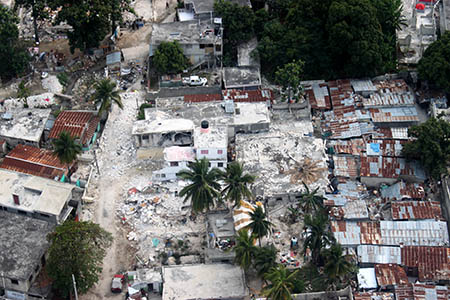 The most momentous earthquake of the 21st century occurred at 16:53 local time on the afternoon of 12 January 2010. It lasted barely a minute, and killed more than 300,000 people.

Many built up hillsides in the country’s capital, Port-au-Prince, were swept away.
1.8 million people were suddenly homeless, including 300,000 injured and seriously injured, not to mention countless orphans.

One of the poorest countries on earth was a scene of disaster and chaos.

Most people had to simply rely on their bare hands to search for those buried beneath the rubble. Violence and looting quickly escalated.

The people fled the cities for open, undeveloped land. Would there be even stronger aftershocks? How could aid workers and medical staff reach those in need quickly and safely, given that the international airport was closed?
Many villages were cut off from the outside world, and vast quantities of medicine were urgently required. 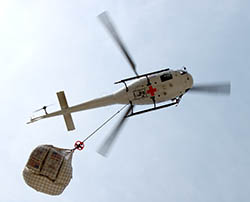 Anestis Ioannidis, president of Human Plus, is soon on site with a pragmatic solution. “In Haiti’s desperate infrastructure, a helicopter is like hitting the jackpot. It’s the only way to guarantee that aid supplies will get to where they are urgently needed,” he said.

With the support of the “Ein Herz für Kinder” organisation, an affiliate of the BILD newspaper, and three other German aid organisations, Ioannidis was able to send the “German Help One”, a helicopter run by German Heli Aviation, to the capital of the neighbouring Dominican Republic with an Ilyushin IIL-76 Russian cargo plane  just a few days after the quake.

The aircraft was carrying several tonnes of aid supplies, such as tents, bandages, medicine, baby formula and infant food.
A new chapter of disaster aid thus began, with all local aid organisations being able to request and use the “German Help One” helicopter via the operations centre in Santo Domingo.

Ioannidis reiterated that “the helicopter also takes doctors and paramedics quickly and safely to the capital, Port-au-Prince, and the surrounding disaster areas. And let’s not forget the seriously injured! They can only be flown out by helicopter.”

Over the next four months, the helicopter made hundreds of flights. A worker from a French aid organisation, who was suffering from dengue fever, was also able to be flown to a hospital for treatment in Santo Domingo at the last minute. Once again, every second counts. 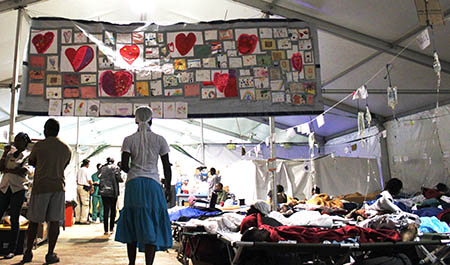 The city of Léogâne, situated 30 kilometres west of Port-au-Prince, was the worst affected by the earthquake, with 90 percent of it destroyed. The field hospitals were overflowing. Many patients could only be freed from the rubble after several hours or even days. A large number had suffered spinal injuries or had lost limbs as a result of crushing. 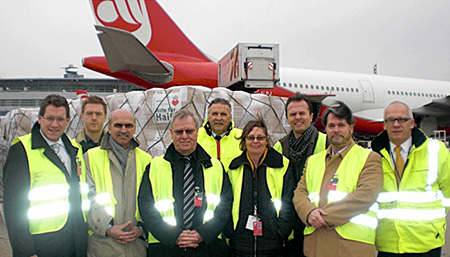 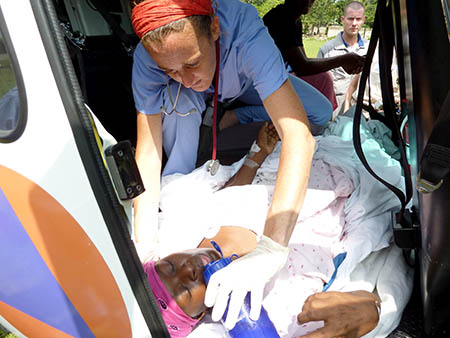 Ioannidis (3rd from left in the photo on the left) mobilised his vast network for a good cause. With the help of Air Berlin, the American Chamber of Commerce in Austria, and ÖBB RCA (Rail Cargo Austria, run by Austrian Railways), he arranged for 60 tonnes of additional aid supplies to be transported to Haiti by helicopter, enabling even those in the remotest regions and isolated mountain villages to be reached.

The helicopter crew pushed the limits of what was humanly possible, moved by the horrific fates, injuries and disfigurements suffered by the earthquake victims. The gratitude of the people, especially the children, was also indescribable.

The children were the biggest victims of this disaster. Thousands lost their parents. The lack of administration or constitution means reuniting families is, in most cases, impossible.

The Haitian authorities expect a significant rise in child trafficing…

After four months of “German Help One” operations in Haiti, we took stock, and can report
* more than 350 air ambulance flights
* transportation of over 2,400 medical and other aid workers
* distribution of 400 tonnes of aid supplies by airlift
We thank our partners, facilitators, co-operating aid organisations, the medical and logistics staff, and everyone else who made this aid project possible and contributed to its success.